When we launched Gordon Hayward’s digital campaign in 2014, one of his management team’s goals was to find opportunities for him within the world of multiplayer online gaming.

If you’re wondering what that is, you’re not alone. But then again, neither are the gamers. There are millions of them, all part of an industry that generates billions of dollars annually.

Gordon was a player and fan of League of Legends (LOL), the most popular game of its kind in the world. And while Gordon had already done a few things with the LOL community, his reps wanted to build awareness of his interest in online gaming on a much larger scale, hoping to open up an entire new marketing demographic to him.

The image sent the social media universe into a frenzy. People were asking: Who the hell does Gordon Hayward think he is?

As we explored different strategies, we discovered two things:

From that initial insight, a plan took shape.

One of the keystones of Gordon’s marketing campaign was his blog, and to that point, we had used it primarily to talk about basketball. We decided to use that fact to our advantage. Working with Gordon, we created a new blog entry entitled, “The Best in the Game.” It began like this:

“My name is Gordon Hayward, spelled with a G. And I am the best player in the game today.”

We also created three social images to promote the blog, each of them featuring a quote from the blog itself. 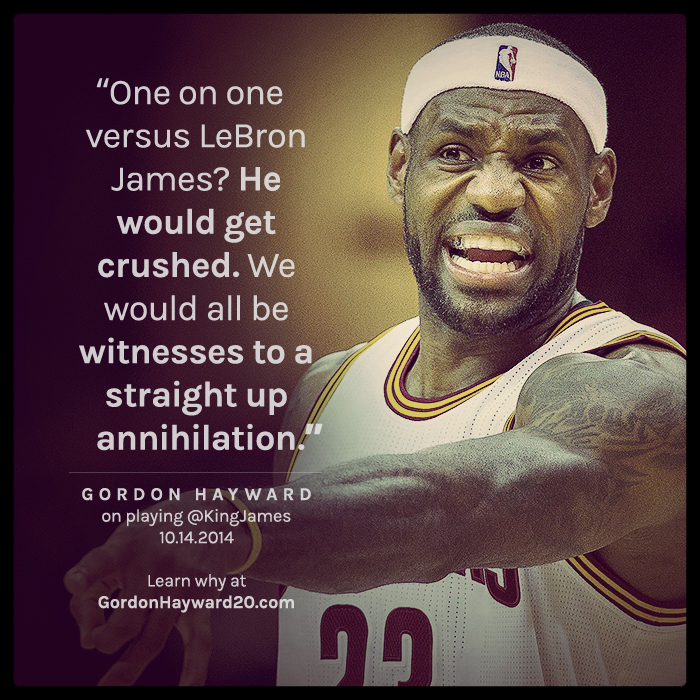 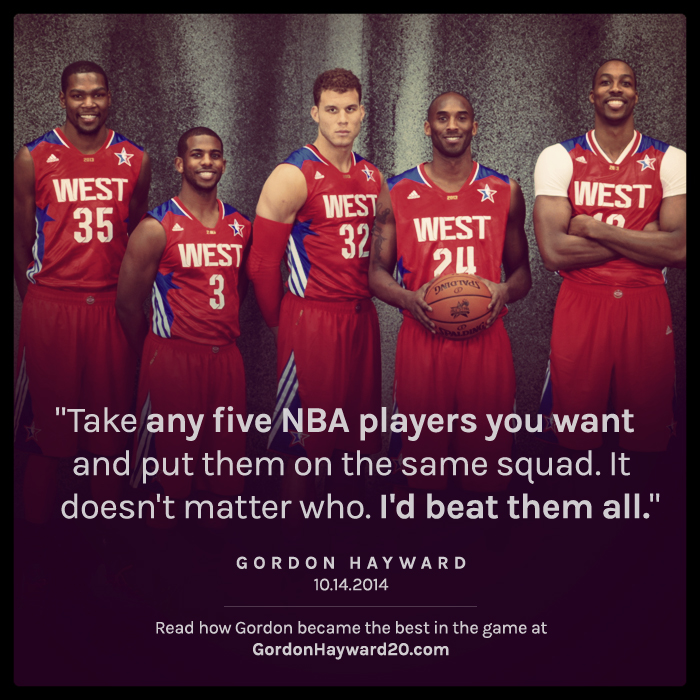 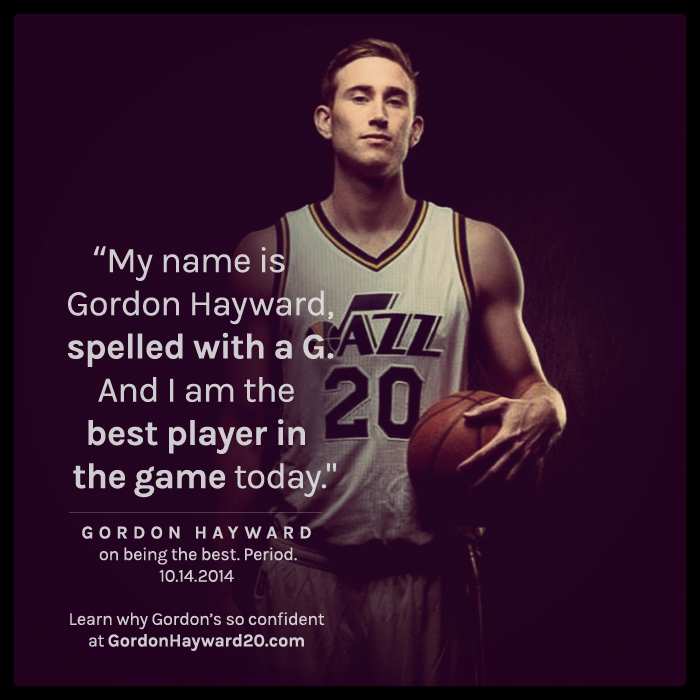 These images and the blog entry that accompanied them won the Internet for Gordon Hayward.

We began with the image of LeBron. (It would be hours before we had a chance to post the second image, and the third never went up.) The LeBron annihilation post sent the social media universe into a frenzy. People were asking: Who the hell does Gordon Hayward think he is?

“@gordonhayward: If I played @KingJames 1-on-1, I'd crush him." Confidence level waaaay too high g-heezy

@gordonhayward @KingJames was this Twitter account hacked? are u stupid? ur garbage. would u even start on any other team then the Jazz

“@gordonhayward: If I played @KingJames 1-on-1, I'd crush him. My new blog on why I'm the best in the game:”they must have good weed in Utah

Not only that — so many users rushed to Gordon’s web site to read the blog that they crashed his web site. What that meant was that no one could find out why Gordon thought he was the best player in the game, and in turn, that poured viral napalm onto his tweet about LeBron.

Within a few hours, stories about Gordon were everywhere online, and they were being shared at astronomical rates, too. (ESPN’s story alone was shared 46K times, while a ReddIt post about the story was one of that day’s hottest headlines.) The articles also detailed what the blog entry was actually about, revealing one of the most epic troll jobs in NBA history. After the first nine paragraphs of the blog — all of which detailed how badly Gordon would beat everyone in the NBA if he played them, even five at a time — he revealed a simple truth:

No athlete on earth is as good at League of Legends as I am. 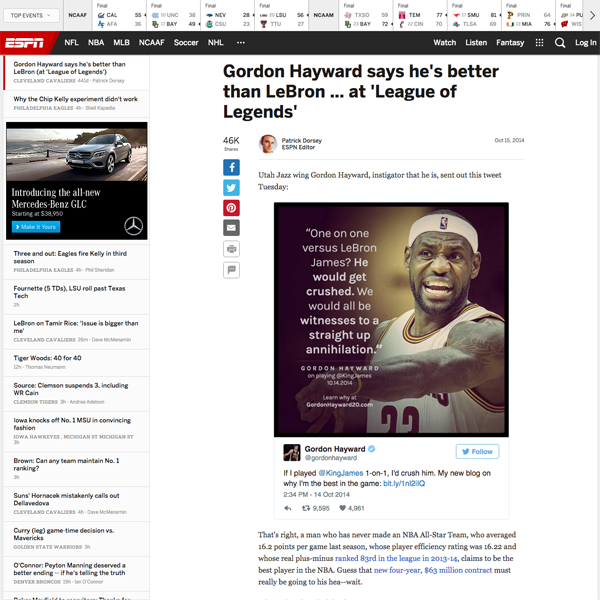 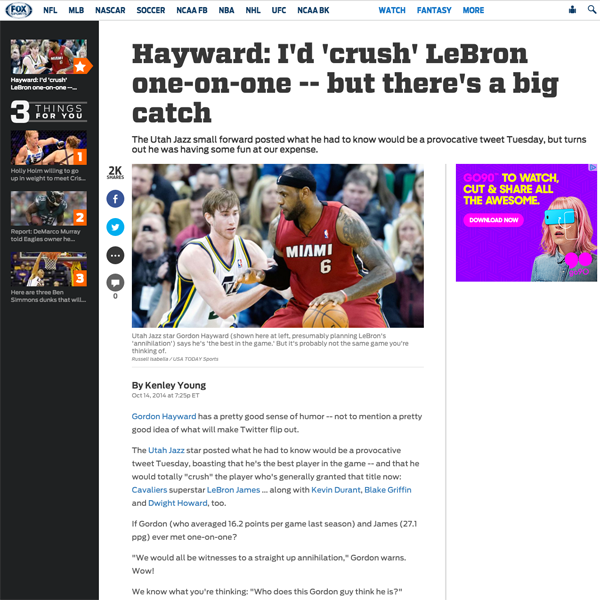 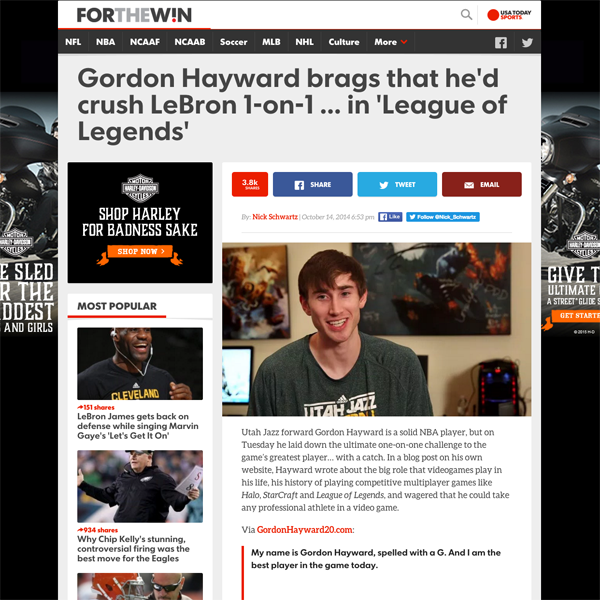 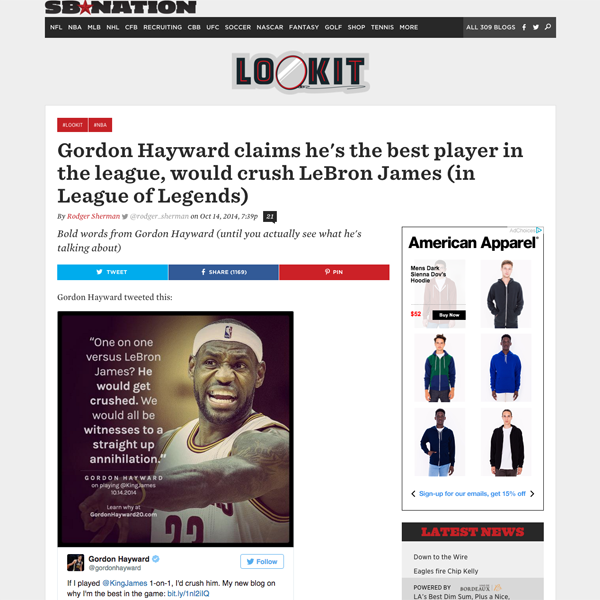 Media coverage of The Best in the Game was everywhere, and engagement was sky high.

The word was out: Gordon Hayward was the best League of Legends player in professional sports.

A year later, it was clear that Gordon’s title was here to stay.

At the start of the 2015 NBA season, Gordon had a very public showdown with radio personality Colin Cowherd. For months, Cowherd had been poking fun at online gamers mercilessly, deriding eSports for claiming to be a sport at all. Gordon had heard enough. In response to one of Cowherd’s particularly lengthy diatribes that characterized gamers as dorks, he posted the following image across all his social media:

Hold up…@ColinCowherd is making fun of gamers for being dorks? People in glass houses… pic.twitter.com/L5UjhErkyT

Once again, Gordon’s post spawned a viral response, generating numerous stories about how he had come to his fellow gamers’ defense. It culminated in an appearance on Cowherd’s radio show, where Gordon and Cowherd came to something of an understanding of just how much work being a League of Legends gamer entailed.